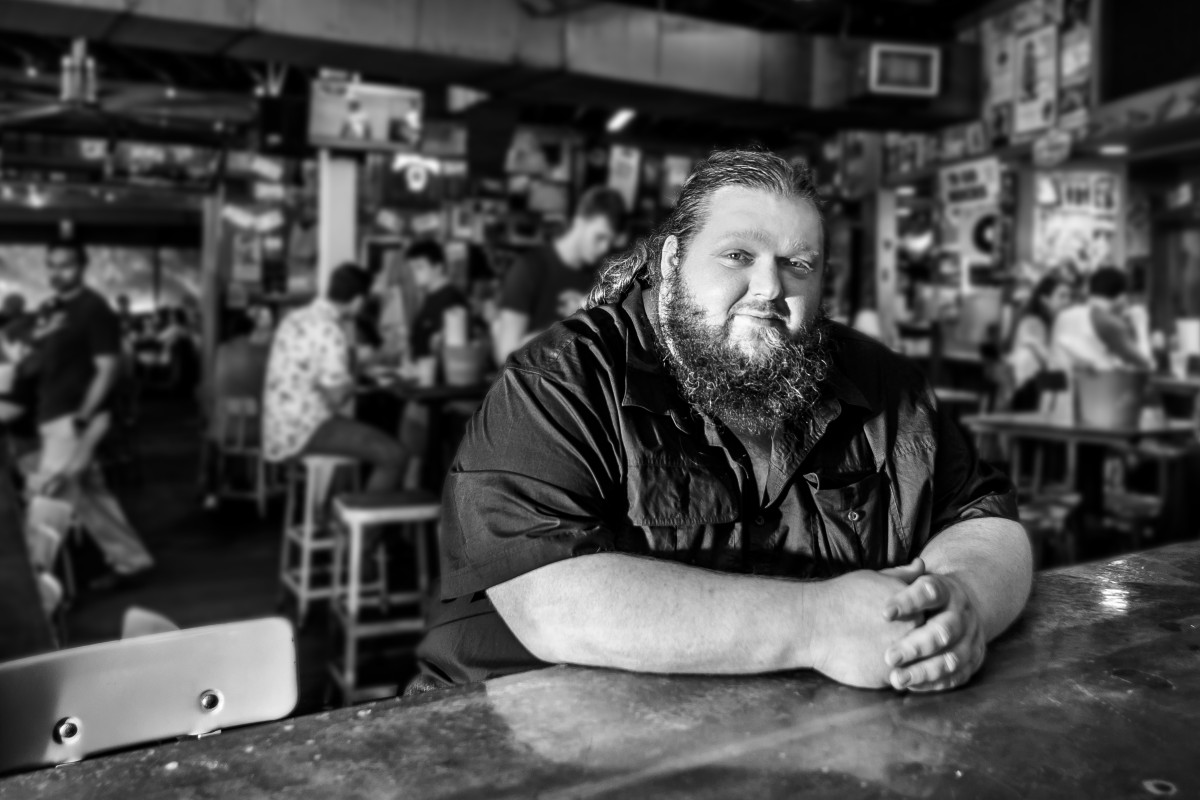 The Big Bottle of Joy is about celebration - hard-won, overflowing, exuberant celebration. Matt Andersen’s latest long-player lives up to the grand title from its opening song, “Let It Slide”; a muscular, organ-drenched urge for people to chill out and be good to each other - to its understated, romantic curtain-closer, “Shoes.” Andersen finds reason to sustain this celebration of the life we share together everywhere - on the road, missing a lover; between the sheets in a southern Ontario motel room; from Montreal “all the way to New Orleans;” in a “little kitchen ballroom” on a quiet night at home. Over a dozen songs infused with raw blues-rock, rollicking Americana, thoughtful folk, and ecstatic gospel, he testifies to something we could all do well to remember: the time we have together is special, so let’s spend it the right way.

“Being good to each other, you know, in taking care of each other - those are the biggest things I want to put out there,” Andersen says. “If we're in it together, it'll be a lot easier than trying to do it on our own.”

Appropriately, The Big Bottle of Joy was a team effort. The title doesn’t just refer to the record, but the band that Andersen put together to make it. The songs were written with not just a band in mind, but this exact group of people, and Andersen tailored moods and arrangements and sections to elevate the already substantial talents of the players. The approach gave them the best possible scenario to record live-off-the-floor at The Sonic Temple, and the individual performances - shot through with the kind of dynamism that can only come from being in a room together - flow seamlessly into each other.

“Somebody told me a long time ago that when you put a band together, you need to make yourself the weakest musician,” Andersen says. “So that's always what I've done. And they're all just absolutely monstrous at what they do.”

The combined vocal power of the Smiths: Reeny, Haliey, and Micah - is all over the album, adding extra electricity to “How Far Will You Go” and soulful harmonies to the pining “Only an Island.” Drummer Geoff Arsenault’s nuanced rhythms mimic bumpy, endless highways on “Rollin’ Down the Road” and swing soft on the ode to touring “Miss Missin’ You.” Mike Farrington Jr.’s bass lines drive the pulse of love songs like “Golden” and the Richie Havens cover “Hands of Time,” and Cory Tetford shares six-string duties to add extra flavour to the support anthem “So Low, Solo.” Kim Dunn’s bright, rolling piano moves “Aurora” - a Canadian, mini-epic road romance - down the line in fine style, mingling with the lush organ accompaniment of multi-instrumentalist Chris Kirby (who also sets the place on fire for “What’s on My Mind”). And throughout, Andersen leads the band in masterful fashion, weaving his way through intimate moments and raucous ones. The final song, “Shoes” (co-written with Donovan Woods), finds him celebrating a precious night at home, “dancing with the shoes we’ve got on,” as Kirby’s accordion and Smith’s Hammond B3 organ plays Andersen through a twirl with his one-and-only around the kitchen floor.

The Big Bottle of Joy’s songs were crafted in collaboration with some of the finest songwriters in the game. Terra Spencer, Carleton Stone, Breagh Isabel, Dylan Guthro, Dave Sampson, Ian Janes, Andy Stochansky, Ross Neilsen, Cory Tetford, Chris Kirby, Clayton Bellamy, Jason Blaine, and the aforementioned Donovan Woods all make appearances in the credits. It was recorded by Lil Thomas at The Sonic Temple in beautiful Halifax, Nova Scotia; mixed by Steve Dawson; mastered by Kim Rosen at Knack Mastering; and produced by Matt Andersen himself.

Andersen will be taking The Big Bottle of Joy - the complete, world-class, best-in-show band - with him on the road to keep the celebration going throughout the year. Come out and add your voice to the chorus.

When Matt Andersen steps on stage, he brings a lifetime of music to every note he plays. His latest album, The Big Bottle of Joy, is all about hard-won celebration; a dozen songs infused with raw blues-rock, rollicking Americana, thoughtful folk, and ecstatic gospel. Andersen’s stage presence, buoyed by his spectacular live band (also called The Big Bottle of Joy), is informed by decades of cutting his teeth in dusty clubs, dim-lit bars, and grand theatres all over the world, delivering soulful performances that run the gamut from intimate to wall-shaking. In the studio, he’s always brought the same attention to detail and commitment to craft as he has to his live show, and the result—a multi-faceted and poignant body of work—has led him to amass over 22 million streams on Spotify and 26 million views on YouTube. In addition to headlining major festivals, clubs and theatres throughout North America, Europe and Australia, he has shared the stage and toured with Marcus King, Beth Hart, Marty Stuart, Greg Allman, Tedeschi Trucks Band, Randy Bachman, Jonny Lang, Serena Ryder, and more. Andersen nabbed the 2013 and 2016 European Blues Awards for Best Solo/Acoustic Act, was the first ever Canadian to take home top honours in the solo category at the 2010 International Blues Challenge in Memphis, won the CIMA Road Gold award in 2015, and has won multiple Maple Blues Awards.

In the best interest of fans and staff, the Event Organizer will continue to monitor local COVID-19 trends and meet or exceed protocols mandated by local governments. By purchasing tickets to this event, you agree to abide by the health and safety measures in effect at the time of the event, which may include, but not be limited to, wearing masks, providing proof of vaccination status and/or providing proof of negative COVID-19 test. Please note these confirmations will apply to all members of your party before they are allowed to enter the event and to any users of the tickets purchased by you. Check back often for updates to your event venue website as guidelines are subject to change.